We often think of the foundation of a building as being absolutely solid. While this is the ultimate goal, it is not often true. Buildings can sometimes be faced with a phenomenon known as vapor intrusion. Contaminated groundwater or soil can emit dangerous gasses that find their way up and into structures. 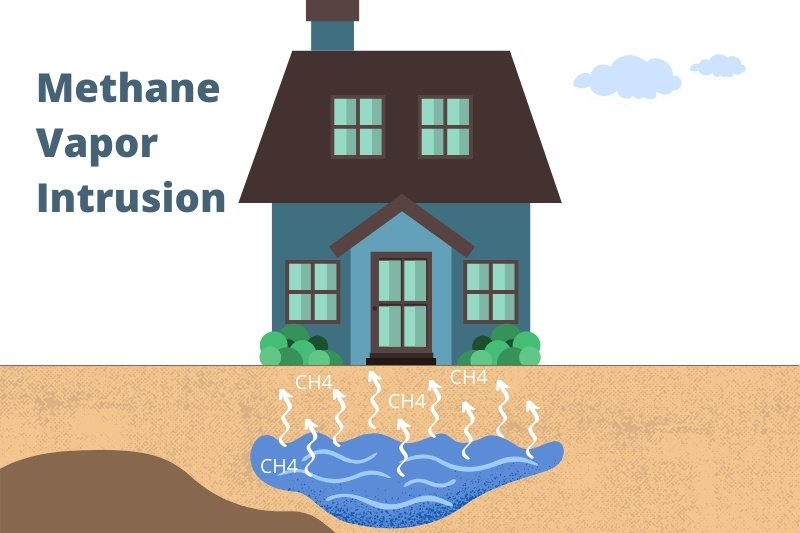 What Is Vapor Intrusion?

We often think of the foundation of a building as being absolutely solid. While this is the ultimate goal, it is not often true. Buildings can sometimes be faced with a phenomenon known as vapor intrusion. Contaminated groundwater or soil can emit dangerous gasses that find their way up and into structures. Various factors can allow those harmful gasses and vapors to pass through a foundation and accumulate in a household or business. Vapor’s natural inclination is to rise, and follow the path of least resistance. Even perfectly poured concrete is naturally porous once dried. Combined with crevices that form around pipes, or sumps, and a structure is not naturally protected from rising vapor intrusion.

Factors that affect the amount of vapor entering a building:

Depending on the types of vapor rising up through a structure, the situation could range from harmless to explosive. Some vapors are harmful to humans when concentrated in high enough densities, and some can even create a combustible environment.

Examples of VOCs (volatile organic compounds) found to have seeped into structures via vapor intrusion:

What is Vapor Intrusion Mitigation?

Vapor Intrusion Mitigation is the process, either during construction or when retrofitting a building, of constructing a system to dispel these harmful vapors. The surest way to mitigate vapor is to clean up the source, but this can be a long and expensive process. Vapor Intrusion Mitigation systems buy time for the occupants of a building by dispersing the vapor away from the building, or actively negating the vapor. This mitigation can be passive, through structural considerations, or active, as in mechanisms or machinery that expeditiously remove harmful vapors. The methodology used is determined by a variety of factors, including expense, the breadth of the problem, and environmental factors of the building site itself. Some building zones require vapor testing to take place before construction can begin.

Do I need Vapor Intrusion Mitigation?

If there’s a chance that chemical vapor or soil gas is seeping into your home or business, testing your soil can determine whether it really is, and to what extent. A geotechnical engineer can test your soil for a variety of contaminants that can release vapor into your building.

Some building zones even require soil testing, as they lie on top of lands that were previously gas fields, or are known to have contaminants. California especially has a high number of zones where soil gas testing is required before construction can take place.
It is also not uncommon to add vapor intrusion mitigation mechanisms into new construction to protect against possible future contaminations, as being proactive is easier than retroactive when it comes to vapor mitigation. Once the structure is built, the mitigation options are reduced (but not eliminated!)
A qualified geotechnical engineer can also help design either a passive or active vapor intrusion mitigation system, and in some cases even install it themselves.
Vapor intrusion is a real threat and must be treated as such. Soil vapor is frequently odorless, and can cause harm before you’re even aware there is a problem. Investigate your vapor intrusion mitigation options, and protect the people who occupy your buildings.

PrevPreviousEverything You Need To Know About Methane Mitigation Systems
NextWhat Is Remediation Contracting?Next