What Causes Landfills to Emit Methane and What Can We Do About It?

Decomposing organic matter deep within landfills emits literal tons of methane gas into the atmosphere each year. Using landfill methane capture programs, up to 90% of gas emissions can be redirected and used for fuel, electricity, or industrial applications. 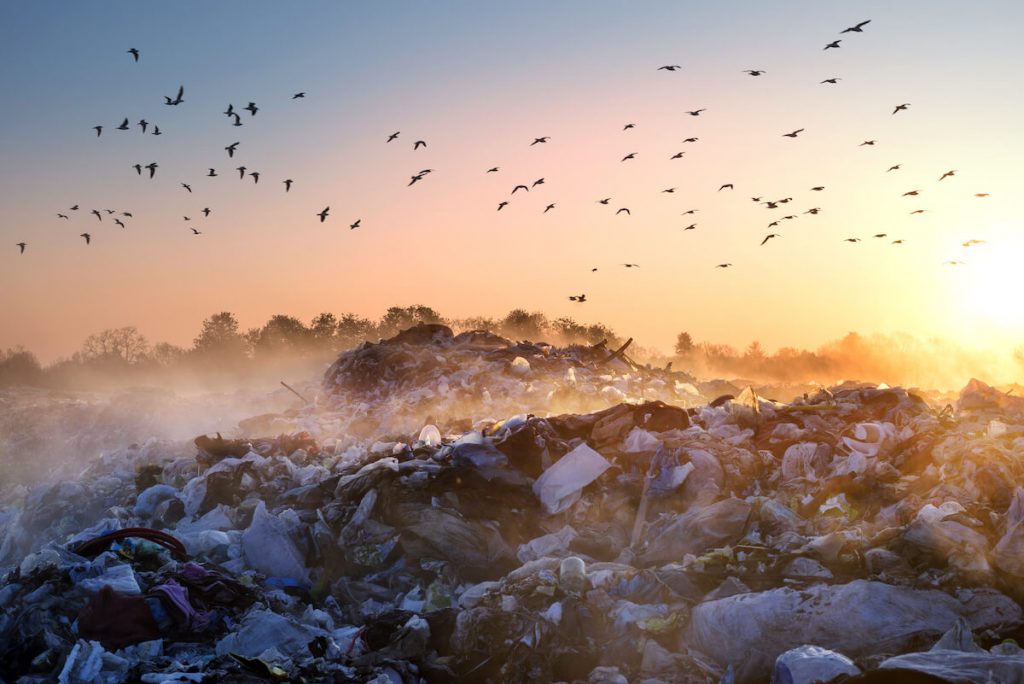 Each year, around 570 million tons of methane gas are released into the atmosphere. This has increased the concentration of methane in the air we breathe to about 2.5 times the levels present just 200 years ago.

Around 12% of methane gas produced each year is due to the decomposition and fermentation of waste in landfills. Landfills in the United States are responsible for a significant portion of this methane gas. Methane gas can seep into the soil and be released into your home unless you are protected by a vapor mitigation system.

What Causes Methane Gas to Emit From Landfills?

Before we can reduce the amount of methane emitted from landfills, we first need to understand how methane gas is produced.

As more materials are discarded into the landfill, waste is pushed deeper into the pile, limiting oxygen flow. Without oxygen present, decomposition becomes an anaerobic process. This results in different chemical reactions as the physical materials break down, releasing methane, carbon dioxide, and nitrogen.

The typical landfill will have both anaerobic and aerobic decomposition taking place. This results in gas emissions that are about half carbon dioxide and half methane gas.

How is Methane Gas Extracted from Landfills?

While we can’t alter the decomposition process that leads to methane emissions, it is possible to trap and extract landfill gas emissions for productive purposes. Collection of landfill gas can also reduce odors and other hazards near the landfill.

Landfill methane capture uses a series of wells, blowers, and flares to direct emitted gas to a facility where it can be treated and processed for use. These are installed on closed landfills that have been covered and no longer are actively receiving waste. This allows the system to be installed deep into the mound where anaerobic decomposition is taking place.

Up to 90% of gas can be captured at covered landfills. When a vapor barrier mitigation system is placed over the landfill, this can reduce the amount of gas that escapes into the atmosphere. These same barriers are used to protect homes from harmful gasses seeping in through cracks in the foundation.

How is Captured Methane Gas Used?

Methane gas is the primary component of natural gas used in many homes for heating and cooking. Captured methane can be treated and processed as energy, fuel sources, and various industrial applications.

Landfills aren’t the only location where anaerobic decomposition takes place. Within cities, around demolished buildings, and under home foundations, methane gas is being produced through decomposition every day. While the concentration might be less than at a landfill, that doesn’t mean the methane emissions are safe.

New home builders and homeowners should consider having their soil tested for the presence of methane gas. If gas is present, you’ll need an experienced methane mitigation company to help you create a plan.

Arroyo Geoscience, Inc. is an environmental design-build company located in Los Angeles. Our highly trained team can answer any questions you have about methane mitigation while completing the necessary steps to test your home for the presence of this potentially harmful gas. If gas is found in your soil, our team can get to work right away designing and installing the best methane mitigation solution for your needs.

When you work with Arroyo Geoscience, you get professionally trained geological engineers and licensed engineering contractors dedicated to providing you with the solution you need to stay safe, healthy, and happy in your home. Call us today at (818) 967-5977 to get your personalized quote.